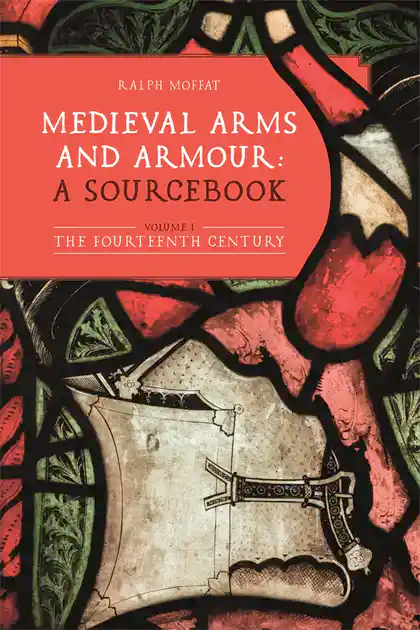 Volume I: The Fourteenth Century

The past speaks to us in many forms, through texts and images, works of art, objects, buildings, and even landscapes. In order for us to speak about history we need to consult these witnesses of times gone by, ask the right questions, and weigh the answers.
But first of all, we need to be aware of their existence, to locate and access them, which in the case of thousands of texts that may or may not contain relevant information to our subject(s) of study will not always be easy.
Lucky for us if someone else has already done it – which is essentially where Ralph Moffat comes in. His latest work is a collection of primary sources on medieval arms and armour – i.e. a selection of various texts showcasing they way medieval contemporaries spoke about arms and armour, in which contexts they did so, which terms, descriptions, and definitions they used, and much more. This first (of three) volume is dedicated to the 14th Century, a phase of change and innovation in the world of medieval weaponry, and also a time which saw a massive increase in the production of written records.

While we know swords, daggers, crossbows, helmets, shields, maille or plate armour, and other pieces mainly from museum displays, all of these artefacts were once in use, they were manufactured, traded, repaired, stored, lost, stolen, evaluated, recorded, thrown away, recycled – in other words, they were a regular, omnipresent part of medieval everyday life.
Arms and armour appeared in many different contexts, not only on the battelfield or in the lists. So it seems quite natural that they are also mentioned and discussed in many different kinds of written sources. Ralph Moffat divides his material into two categories: Official documents such as wills, inventories and household payments, craft statutes and related documents, muster rolls and other royal or parliamentary records, legal documents, and official or mercantile correspondence on the one hand, prose sources like religious works, chronicles, biographies, travellers‘ accounts, and expert advice on the other hand.

Of the 151 documents presented in this collection, wills and inventories are the most numerous source types. Sometimes the sheer amount of arms and pieces of armour listed in these records is simply baffling, but so is the frequency with which they are described as ’worthless’, ’damaged‘, ’worn out’, ’rotten’, or similar, which beggars the question why they were kept in storage in the first place.
That repairs and refurbishments, and even recycling (turning a gamnbeson into an aketon) were common practice also becomes evident by the frequent mention of payments for such work or the materials required. More details on materials, working methods, quality standards, and much else can be learned from the craft statutes.

In his introduction Moffat offers descriptions of the different source types, their relevance, and inherent problems. One of the latter is the use of vocabulary which may have been familiar to the contemporaries, but is often far from clear to us. For example, many different words were used for various types of helmets, but not all of them could yet be identified with certainty.
The illustrated glossary, which takes up some 70 pages, is therefore of the greatest value, since knowing how contemporaries talked about arms and armour is fairly useless unless we are able to translate their vocabulary into our modern language.
It is sometimes surprising to find certain terms in the sources and hence in the glossary, since they are commonly attributed to later times. The history of medieval arms and armour may not have to be rewritten, but a great number of details in these collected documents broaden and deepen our knowledge and understanding of what has actually been in use, and how, as well as details of production.
One prime example is the lining of helmets, gauntlets, breasts, and other parts of plate armour. Since it was made from perishable materials such as leather, silk, linen, and so on it is generally no longer present in the surviving artefacts, and rarely visible in contemporary illustrations. It is however frequently mentioned in the texts, which provide us with valuable information as to its production, composition, affixation, and value.
The written sources are often also the only evidence we have for certain pieces of which no existing examples are known, and which can not be identified with absolute certainty in contemporary artwork.

The points mentioned above are only some of the many reasons why Moffat’s work is such a worthwhile undertaking, but it also comes with limitations. Of course these 151 documents are only a personal selection, and while they represent excellent examples of their relative source types, others may provide equally fruitful information and details, so this collection should not be considered the definitive study on the subject, but a first, important, and no doubt gigantic step towards a corpus of source materials on medieval arms and armour.
Because as massive and diverse as it is, this collection only contains texts in English, French, Latin, and Italian, hence missing documents for example in German, Czech, Polish, Spanish, or other European languages. However, this is not so much a point of critique as a challenge, or invitation for other researchers to continue Moffat’s work. After all, he has proven beyond doubt that this is a valuable and worthwhile task!
Moffat is well aware of the limitations and problems, and addresses them in his introduction, where he also offers descriptions of the source types used, reasons for their selection, and hints on how to use this collection for various fields of study. The material presented is not only useful for scholars of medieval arms and armour, but also for

„practitioners of living history – the fighters, crafters, and artists: people who devote time, effort, and expertise bringing the past to life to draw new audiences into the weird and wonderful world of the Middle Ages“,

as the author himself writes in his chapter on how to use his sourcebook.

The documents are arranged in chronological order and listed at the beginning of the book for quick and easy access. The 70 page glossary, illustrated with 52 excellent images, references the numbered sources, so that all the texts with mentions of Jazerants, Pisans, or Springalds can be consulted at a glance.
Persons, locations, and objects are referenced in the extensive index, the bibliography lists unpublished and published sources as well as reference works, and books and articles. All in all, Moffat’s opus is not only very instructive, informative, and interesting to read, but also very usable as a guide through the maze of terminology, a reference book, and an introduction to 14th century arms and armour as objects of everyday use.
Anyone interested in this field of study simply must own this book, and they will find themselves consulting it over and over again. No need for free shelf space, Moffat’s sourcebook will best be kept close at hand on your desk or workbench.