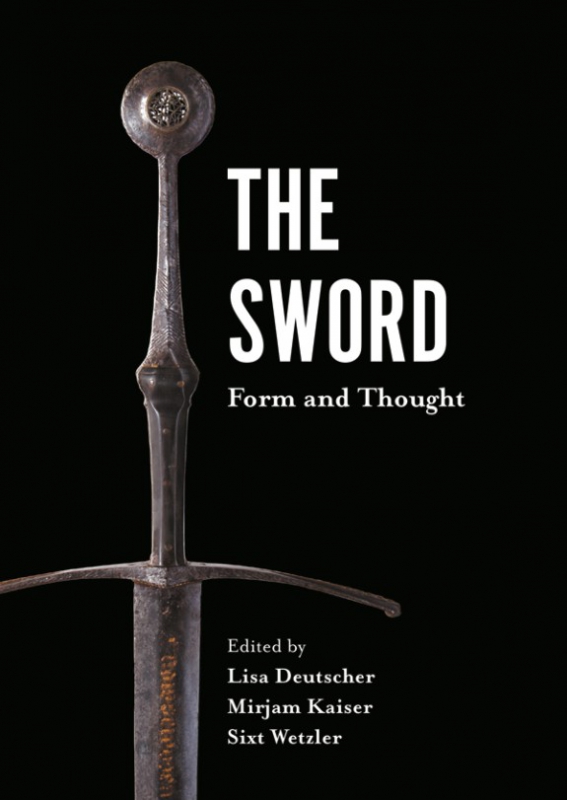 „The Sword – Form and Thought“ was the name of an exhibition held at the Deutsches Klingenmuseum (German Blade Museum) in Solingen from 26th September 2015 until 28th February 2016, and is also the title of the accompanying catalogue.
An international interdisciplinary conference of the same name was organised by the museum on 19th and 20th November 2015, and to make confusion perfect another book of the same title has now been published: „The Sword. Form and Thought“ is a collection of articles based on papers presented at said conference, edited by the organisers Lisa Deutscher, Mirjam Kaiser, and Sixt Wetzler.
The contributions cover a wide range of topics, from production, symbolical meaning, and practical use, to modern day classification of „the most iconic of weapons“, written by international experts from very diverse professional backgrounds: Archaeologist, historian, linguist, swordsmith, restorator, and others.

The essays are organised into four main themes, „typology and classification“, „metallurgy and production“, „symbolic meaning and cultural perception“, and „fighting and swordsmanship“, reflecting the many facets of the sword as a cultural artefact amd historical object, as well as the multi-dimensional approach of the conference.

Typology and classification seem necessary in order to develop a common language of the sword, and make it easier to talk about individual objects as well as groups or „families“, to establish a certain evolution and development, and so on. But they can also obscure individual details, over-estimate chance similarities or, at worst, construct false narratives. Hence, they need to be devised and handled carefully, and questioned constantly, as Iason-Eleftherios Tzouriadis reminds us in his article.
A perfect example for this is offered by Stefan Mäder who recognised several swords within the illustrations of the Utrecht Psalter challenging common typologies, and conceptions of pommel evolution.
On the other hand, the late medieval and early Renaissance Federklingen discussed in Daniel Jaquet’s contribution currently still lack a common terminology, which causes much confusion and misunderstanding among researchers and practitioners alike.
While interdisciplinary sword research has come a long way in recent years and decades, all three articles point towards important future tasks, as well as acknowledging the pioneering work already done.

Sword research in recent years has certainly benefitted from new technologies more readily available for the non-destructive examination of archaeological finds. This becomes clear in three articles on analysis, restoration, and reconstruction of very different examples: An early medieval sword from Beckum/Germany (Ulrich Lehmann, Stefan Roth, and Claus Lipka), the famous VLFBERHT swords (Ingo Petri), and a late medieval sword from the river Rhine (Holger Becker). Particularly the ambitious project of producing a most exact replica of the pattern welded Beckum sword using (almost) only medieval tools, materials, and technology offers valuable insights into the manufacturing processes, material and time consumption, and experience required in order to produce such an outstanding weapon.
The examination and description of a late medieval grave find from Tyrol by Florian Messner and Ulrike Töchterle deals with metallurgy and production as well, but also points towards the symbolic meaning a well made and decorated sword had as a sign of status during the lifetime of its owner, and even still after his death.

Who owned a sword in the first place? Did ownership automatically equal swordsmanship? Or must for example some grave finds of such weapons be re-evaluated as symbols of a certain social status rather than of a warlike profession? (A relevant question particularly in the light of the discoveries of „female warrior“ graves mainly from Nordic contexts.)
In his contribution Jan-Heinrich Bunnefeld analyses form and function of Early Nordic Bronze Age swords with particular emphasis on their quality, find contexts, and signs of use, i.e. wear marks, traces of re-sharpening etc. His conclusion: While other weapons of similar or even greater effectiveness have been available, the sword certainly held a special symbolic meaning for its owner and, perhaps even more important, the society he lived in.
The iron sword from the „Warrior’s Grave“ in Lanuvium, described by Fabrizio Savi, challenges common terminology, but seems to classify its former owner as a horseman, and also hints at relations between Greek and Italic weapon production and use.
The swords of the italic kings, of the so-called Capestrano type, not only symbolise status and power, but in their decoration also tell certain stories, as Vincenzo d’Ercole points out in his essay.
With his analysis of a very unique Japanese sword Michael Mattner widens the geographical scope of the book and presents an example of sword symbolism driven to the extreme.
The falchion on the other hand is a very common one-bladed sword of the late Middle Ages, generally associated with archers and other ’lowly’ infantry, and often decpicted in the hands of demons, Arabs, and other villains in contemporary art. How it came to become a symbol of tenure in several cases in medieval England is the subject of Robert W. Jones‘ contribution.
Different cultural backgrounds – Arab, Norman, and German – are in turn reflected in Emperor Friedrich II.’s ceremonial sword, which is another example of a one-of-a-kind weapon defying classification, as Nicole Mölk points out.

Since the proof of the pudding is in the eating, no work on swords can be complete without considerations of their use. From ca. 1300 on a number of treatises and manuals have been written on the subject of swordfighting, which are being used by a growing number of enthusiasts to recreate this practice – some of the contributors among them.
For earlier times however, no such written and/or illustrated instructions exist. Raphael Hermann, Andrea Dolfini, Rachel J. Crellin, and Marion Uckelmann present preliminary results of an ongoing research project on Bronze Age combat, trying to reconstruct the fighting styles of ca. 1200-800 BC. Starting with an analysis of impact marks on historical blades, different techniques – strikes, parries, counters, etc. – are then executed with replica weapons in order to try and recreate these marks and thus get an idea how the actual swords have most likely been used.
Several hundred years later, Egenolff’s Fechtbuch is a late printed example of the medieval tradition of fight books. It appears to have been very successful, a best-seller in fact, re-printed several times, despite the fact that it is full of mistakes, errors, malapropisms, and changes of meaning, as thoroughly analysed and presented by Matthias Johannes Bauer in his essay.
Form and function are inseperable in any sword, and this becomes especially clear in the Pattern 1796 Light Cavalry Sword, which was designed specifically for use with a particular fighting system, developed earlier by one John Gaspard Le Marchant. Henry Yallop’s article tells the story of the man, the system, and the sword.

For anyone interested in sword history, these are exciting times, and „The Sword. Form and Thought“ perfectly exemplifies the reasons why. Spanning several thousand years of history, this collection of essays showcases the wide range of subjects, methods, disciplines, and not least the fascination, of current sword research.
Dr. Isabell Immel, director of the German Blade Museum, called the 2015 conference „a true festival of storytelling“. These proceedings tell the story of the sword from many different angles, opening new perspectives, often challenging long-held beliefs, and embracing its multi-faceted, sometimes conflicting nature as weapon, symbolic artefact, and cultural signifier. Informative, thought provoking, diverse, and entirely up to date with current academic methods and subject matters, the articles make a strong and valid point for the interdisciplinary and multi-dimensional approach, and the academic and cultural importance, of contemporary sword research.

Despite most of the contributors not being English native speakers, all the articles are well written. The quality of the 90 colour, 27 black and white, and 23 line illustrations is generally excellent. The appendix contains no less than 27 pages of bibliography, and a general index as well as one of places, and one of persons.

For anyone interested in the history of the sword, this book is a „must have“ – whether to learn about new and different findings and conclusions, to stay on top of current developments, to broaden one’s horizon, as a basis for own private research, or simply to enjoy „the consistency and the diversity of the sword, of the form it takes and the thoughts it provokes“, as the editors so aptly put it in their preface.